The Hawley Police Department said goodbye, to Officer Tyler O’Brien as he worked his last shift on 05/14/2020.   Officer O’Brien was hired as a part-time officer in July, 2015.  He became full-time, January, 2016.   Officer O’Brien matured as an officer during his tenure with the Hawley Police Department and we wish him the best of luck, as he begins the next chapter of his law enforcement career with the Crow Wing County Sheriff’s Office.  “Tyler will be missed by the department and the community.  Officer O’Brien is originally from the Staples area and went to his post-secondary school in the Brainerd Lakes area.  I believe it was always Tyler’s goal to obtain employment to be closer to his family,” Chief Joe Backlund said. 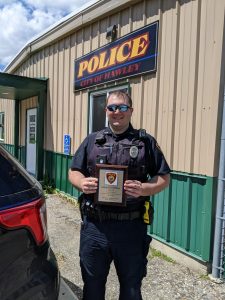