Conservation Officer Steve Chicak told the Herald, “If there are areas where the snow blows off, often times that ice is as much as twice as thick as the snow-covered areas. In the end, a Deer, a Bird or a Fish is not worth your life,” Chicak reminded us. 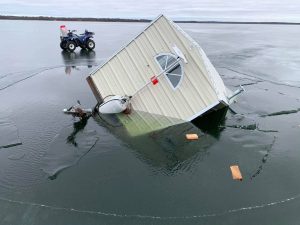 An angler on Rush Lake, which is near Ottertail, is trying to figure out how to get his fish house out of the ice. He stated in a Facebook group, that the warm winds melterdhis holes together causing the house to fall in. He also said that the house was on 7 inches of clear, strong ice, at one point in time.