Running a household in the 21st Century is a lot different than it was in the 20th Century. What we once called Home Economics—decorating cakes and sewing aprons has evolved with the times. In 1994, the class was renamed FACS (Family and Consumer Science) and the curriculum was changed to better prepare students for the world they’re about to take on. “The goal in relabeling the course as FACS was to show that it is an applied science that places an emphasis on issues relevant to today’s individuals and families and skills that are critical to living and working successfully in the 21st century,” FACS teacher, Shannon Olson, explained.
Shannon Olson started her career as a dietitian before she moved into teaching. “When my kids were younger, I wanted to spend more time at home. During that time, some folks at the elementary school encouraged me to get my substitute teaching license. Once I started subbing in Hawley, I knew right away that I wanted to teach,” Mrs. Olson stated 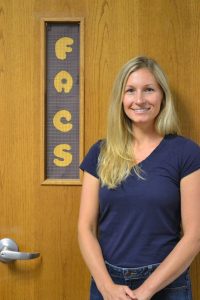