Gerry Kluck started working for the City of Hawley on June 17, 1996. However, he was no stranger to Hawley prior to that. Gerry grew up on a dairy farm northwest of Hawley, and graduated as a Hawley Nugget in 1974.  He served on the City Council in 1994, and about a year and half into his term, the Waste Water Operator position popped up. Gerry applied for the job, and soon went to work for the city. In 1999, Gerry was promoted to Public Works Superintendent.
When I asked Gerry what a typical day on the job looks like, he replied, “There isn’t one, so to speak. Each day is different.” As the Public Works Superintendent, Gerry’s responsibilities include: managing water, waste water, utilities, mowing, parks, street sweeping to crack filling the streets, and snow removal. “I wear a lot of different hats in the course of a week, if not a day,” Gerry stated.
Gerry also oversees and takes care of maintaining and purchasing city equipment, and presents to the city council requests and updates. He puts in the typical Monday through Friday 8 to 5, but the clock doesn’t stop there, which you might have noticed over the winter. “When we’re doing snow removal, we start anywhere from 1 a.m. to 4 a.m. so people can get to work in the morning,” Gerry said.

Read the rest of this great story by Jen Miller in the Hawley Herald!!! 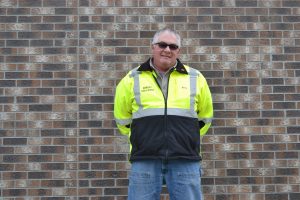 Gerry hangs up the safety vest after 23 years.