“There were so many caissons, they were giving them away, so Hawley put in a request for one,” Larry Elton stated and went on to say, “Hawley’s caisson came from Fort Snelling. It was originally parked where the Fire Hall is now and then moved over by the grain elevator before it was brought out to the rodeo grounds.”
You might have noticed the caisson, which has seen better days, no longer sits out at the rodeo grounds. “There was talk of restoring it a while back but the Legion couldn’t afford the restoration. Keith Larson and I got to talking and decided we should do something with it,” Elton explained. That conversation took place well over a year ago, and was first mentioned in the Herald back in May of 2018. So what became of the old WWI Caisson?
The wheels of the caisson were the brunt of the restoration and the most expensive, somewhere in the ball park of $1,200. The old wooden wheels had gotten so bad, the cart couldn’t be moved, so the wheels had to be taken off. Ron Stulz brought the wheels to Fort Ransom, ND where they were rebuilt during the Sodbusters Day as a demonstration. Sodbusters Day is similar to WMSTR and takes place the weekend after WMSTR. In a project like this, you can be certain there is some behind the scenes support, and that support came from Tom Erickson.

To find out more — read the Herald

To see it in person, go to the Breakfast on the Farm and Rodeo Fest! 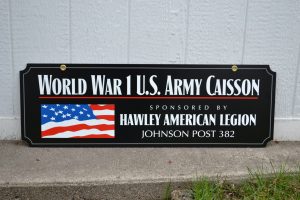