Hawley Archery team traveled to Enderlin, North Dakota on Saturday, February 9 for the Enderlin Bullseye Tournament. Two highschoolers received medals for their efforts. Madison Blattenbauer received a first place medal for a score of 282 and Nicholas Groth received a second place medal for a score of 288. Nicholas actually tied for first, but the other shooter had one more ten then him so he received a silver medal. Madison Blattenbauer and Beth Goodhart both shot 50s at 10 meters and received silver pins.

Aim High and keep up with all of the activities in the Hawley Herald!!! 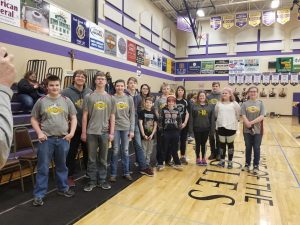