The Nuggets made it two consecutive wins over their neighbors to the east as they defeated Lake Park-Audubon, 67-31, in the season opener.   The Nuggets would jump out to an early lead thanks to a 12-4 run that included seven points from returning All Heart O’Lakes Conference Team members, Jayden Carlisle and Noah Glad.  Perhaps the part of the run that makes the Nugget faithful the most excited was the four early points contributed by Jacob Vetter.  Vetter missed his entire junior basketball season because of a knee injury suffered during football.

Read the whole story in the Herald … 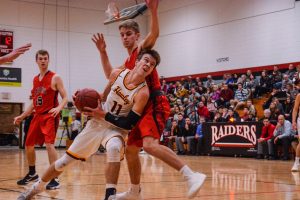