“Curtis Johnson was a senior in high school when he signed up with the Minnesota National Guard in 1950. Shortly after graduation, on June 25, 1950, North Korea invaded South Korea, and by July, American troops entered the war on behalf of South Korea in a fight against the forces of international communism.
Johnson was sent to Camp Rucker in Alabama. The Camp was established during WWII, but inactive from March 1946 until August 1950 when it reopened during the Korean War. The Minnesota Army National Guard’s 47th Infantry Division was sent to Camp Rucker to train other recruits who would soon be sent to Korea as replacements to units as part of a nine-month rotation.
Shortly after Johnson arrived at Camp Rucker, he got the mumps and spent a month in the hospital.”

Read all about Curt’s adventure and find out how he earned his Purple Heard medal in the best Newspaper in Clay County. 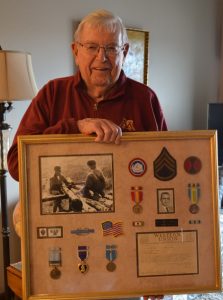